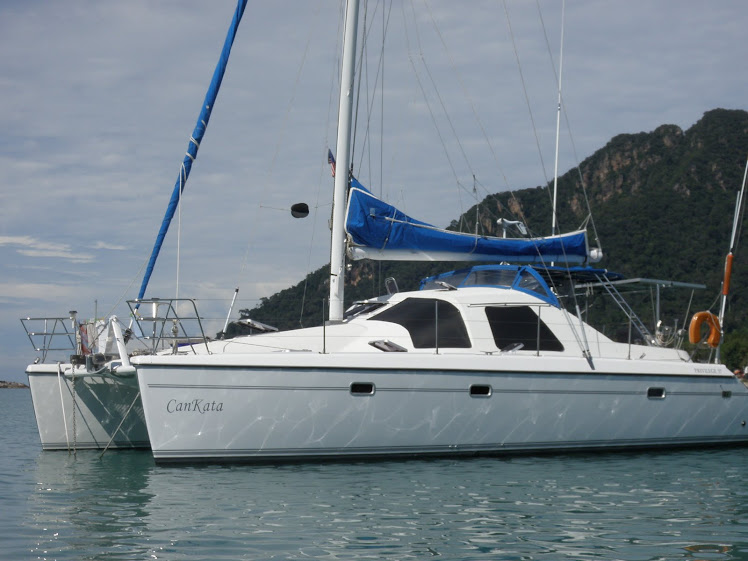 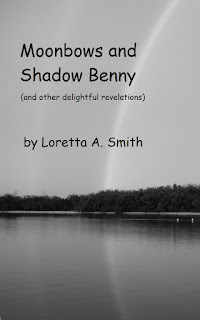 I have published another book. This one is called "Moonbows and Shadow Benny (and other delightful revelations)" and is available on Amazon as an e-book. It is a collection of stories from topics such as moonbows to how high spy satellites fly. If you are curious, here is the link to the book:

If the link doesn't work for you, simply sign on to your Amazon account and search for "cankata" and you will be able to find all my books.

I have published in e-book format only, so no hard copies are available. If you don't have a Kindle, not to worry ... there is a free download for the viewer that you will see when you go into the link.

If you do find the time to read the book, I hope you enjoy it. As always, thanks to all of you who have contributed to some wonderful memories, and to those who have allowed me to mention them in the book. 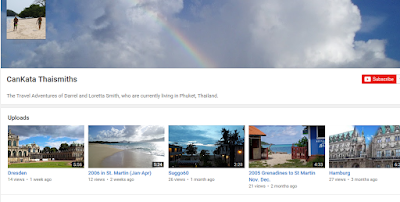 For a number of years now, we have been creating YouTubes of our various adventures.

These adventures include trips to Angkor Wat, the Cameron Highlands, the San Blas islands, the BVIs, Dresden, South Africa, and more.

These YouTubes are easy to find. You can search for them with the words "cankata thaismiths". Once you find our YouTubes, you can click on "Subscribe" to get notifications of any new YouTubes that we post.

An easy way to find our CanKata Thaismiths channel is by clicking on the following link:
https://www.youtube.com/channel/UCf40NRrhQBcA00KIQ98JSaA

We hope that, if you find time to look at any of our videos, you enjoy our photos and commentary. Any comments are welcome.

Cheers!  Loretta and Darrel.
Posted by CanKata at 9:23 PM

Books by Darrel and Loretta

We have written a couple of books that are now "live" on Amazon.

Loretta's book is "Sailing from Canada to Thailand: Adventures on CanKata" which is material that was previously on our web site and blogs.

Darrel's book is "Sailing from Canada to Thailand: Behind the Scenes" which is fairly technical but still a great read.

For our last trip on CanKata, we invited our friends Mink and Jordan, who, like us, live in Nai Yang, Phuket.

They have written the final entry in CanKata’s Guest Book, and they put so much love, thought and effort into the entry that we thought we would share it. 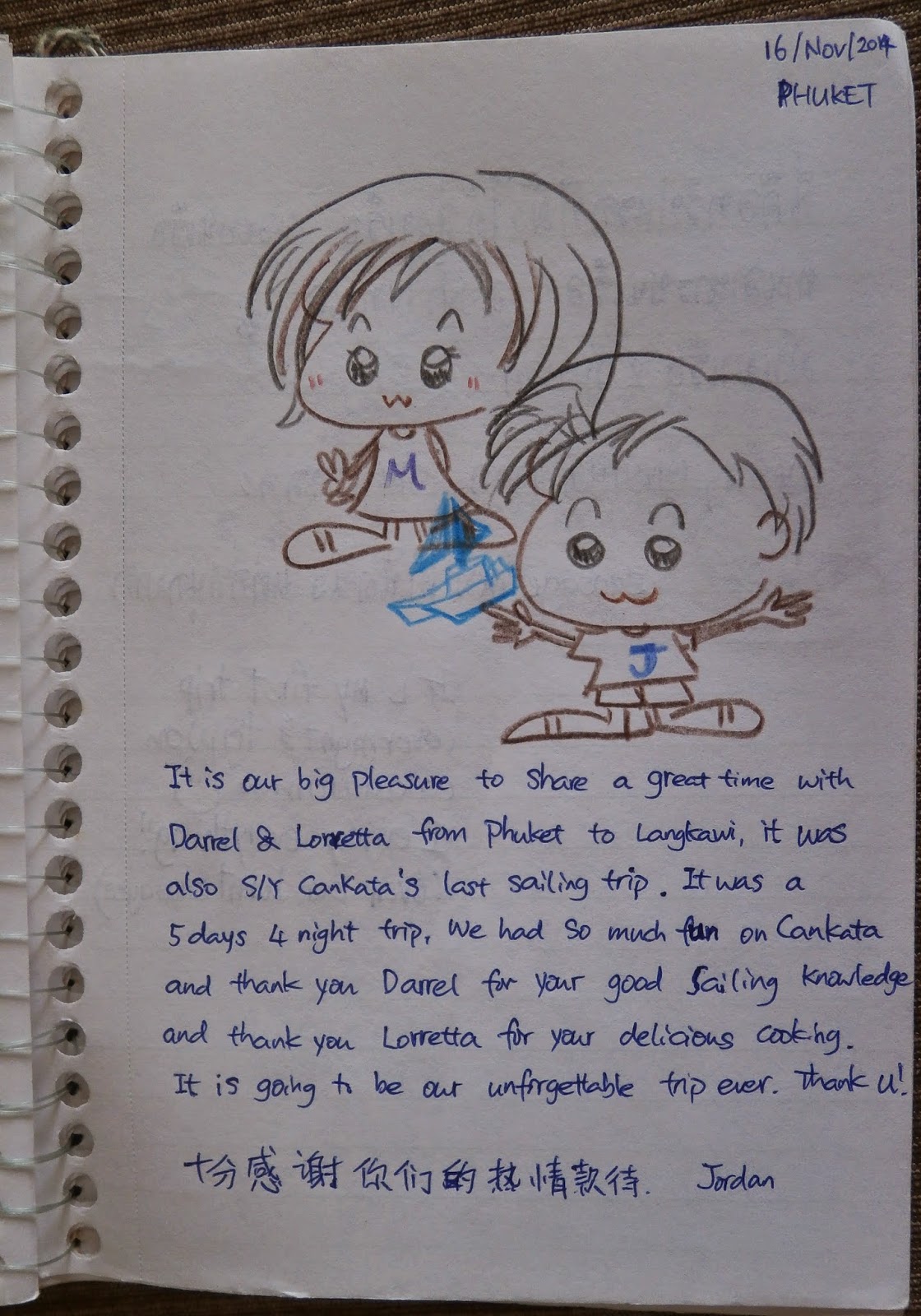 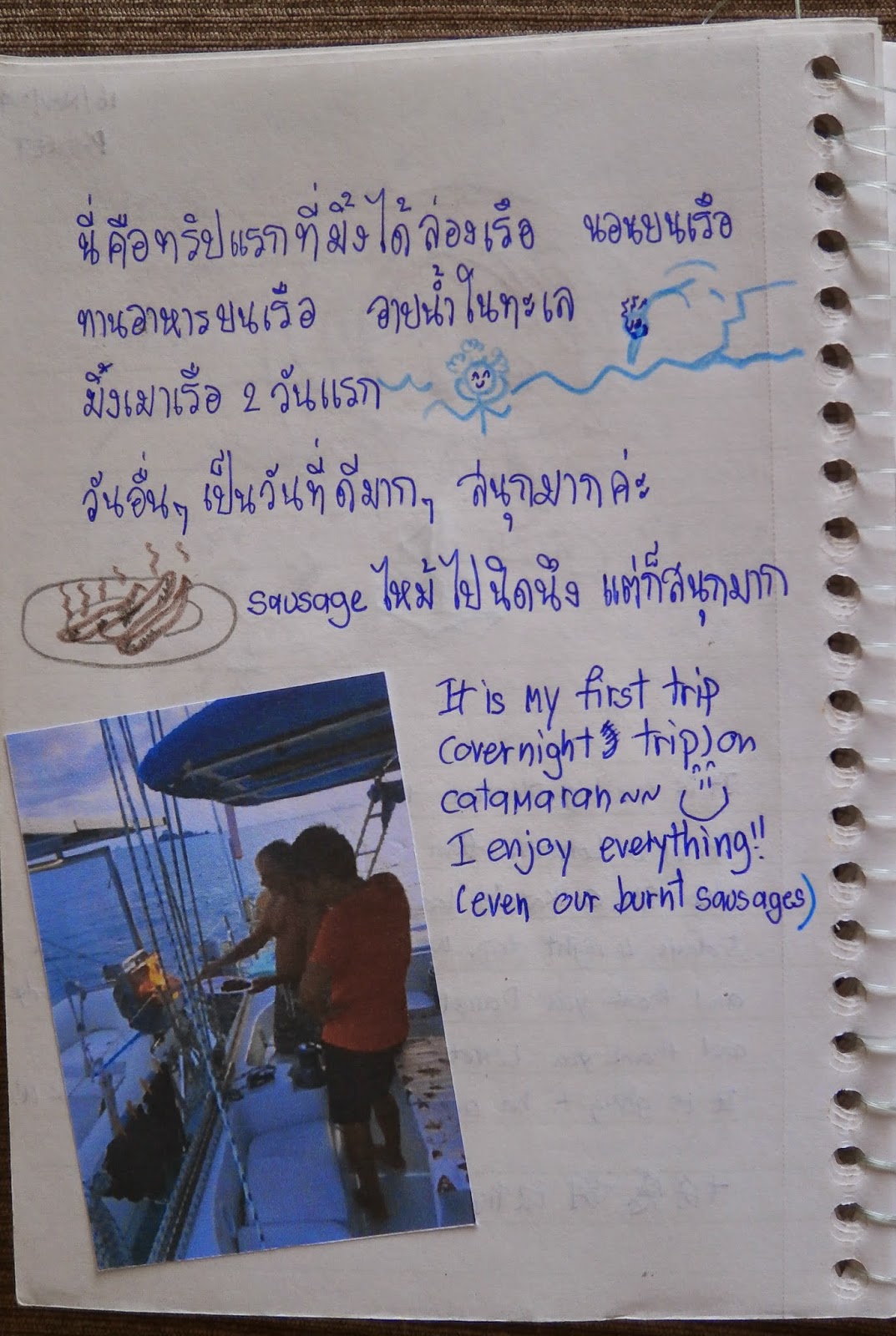 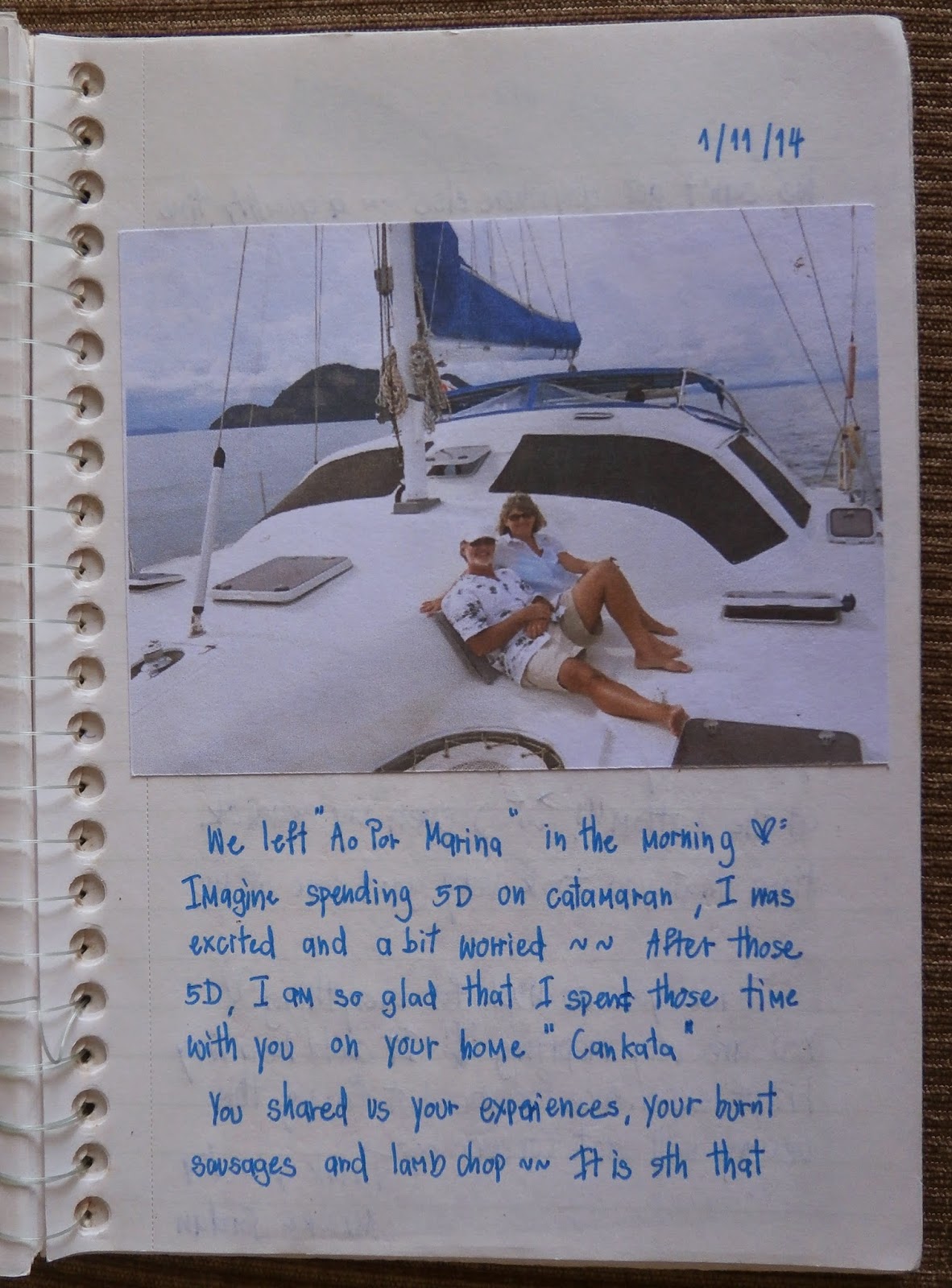 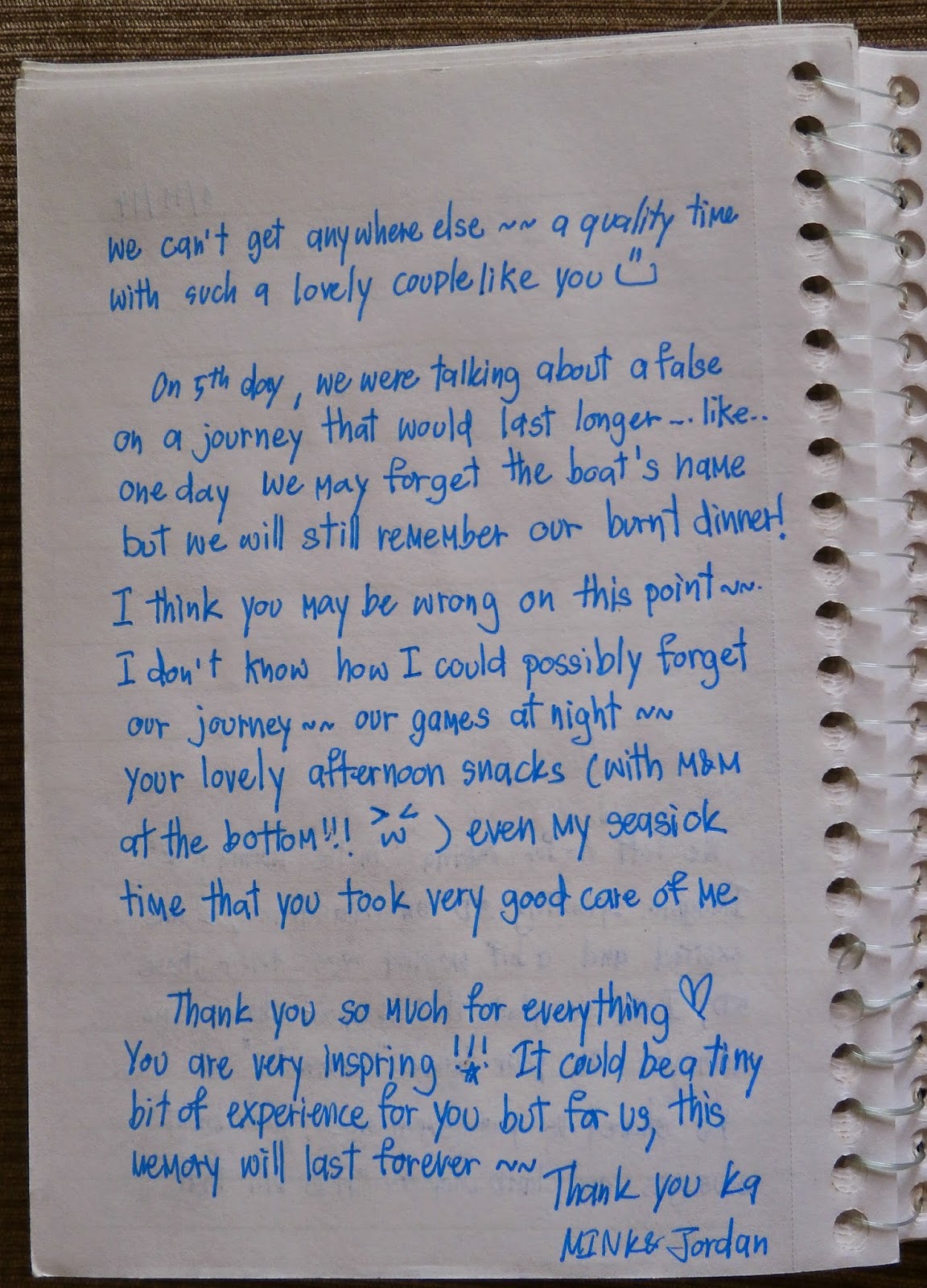 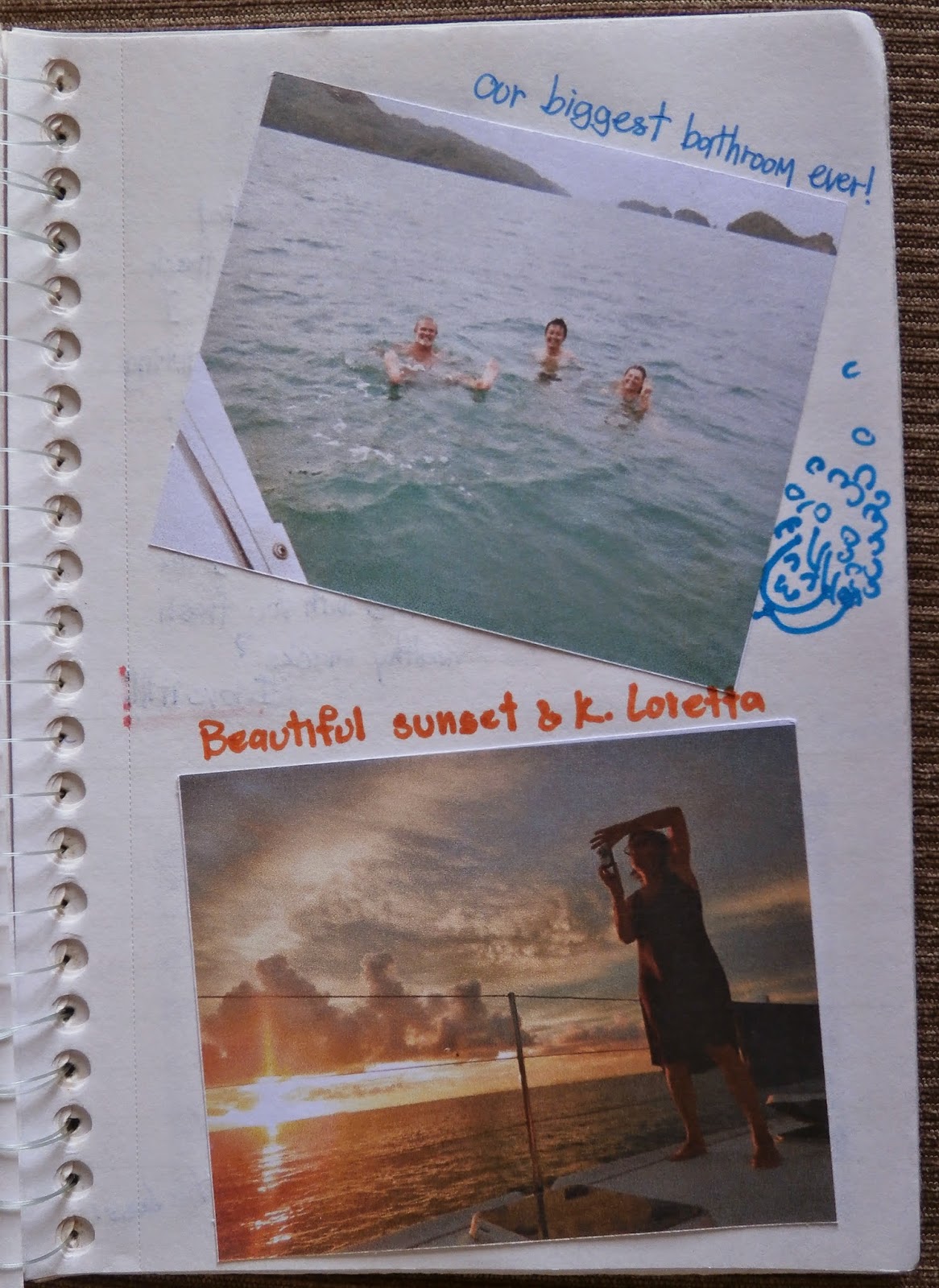 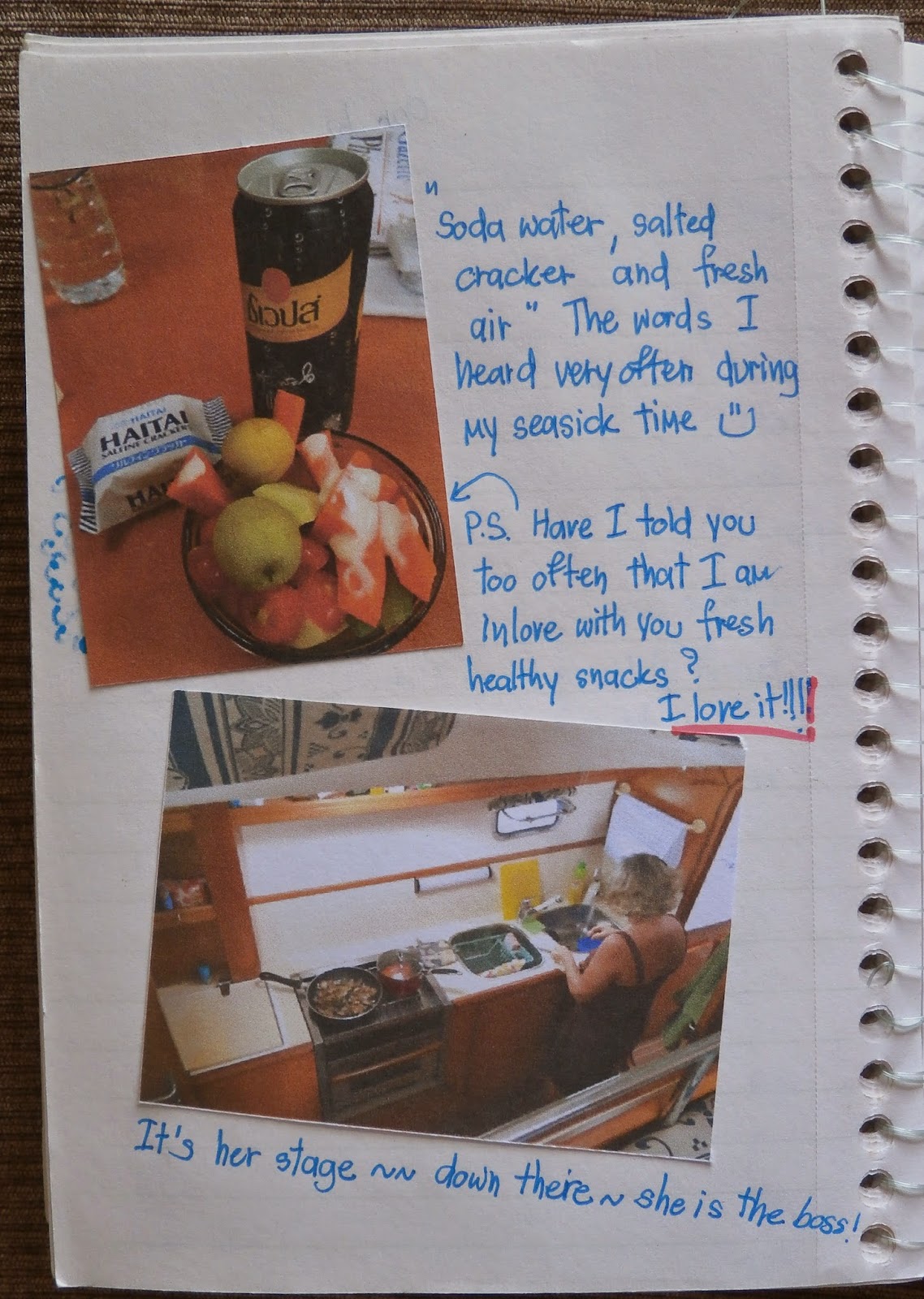 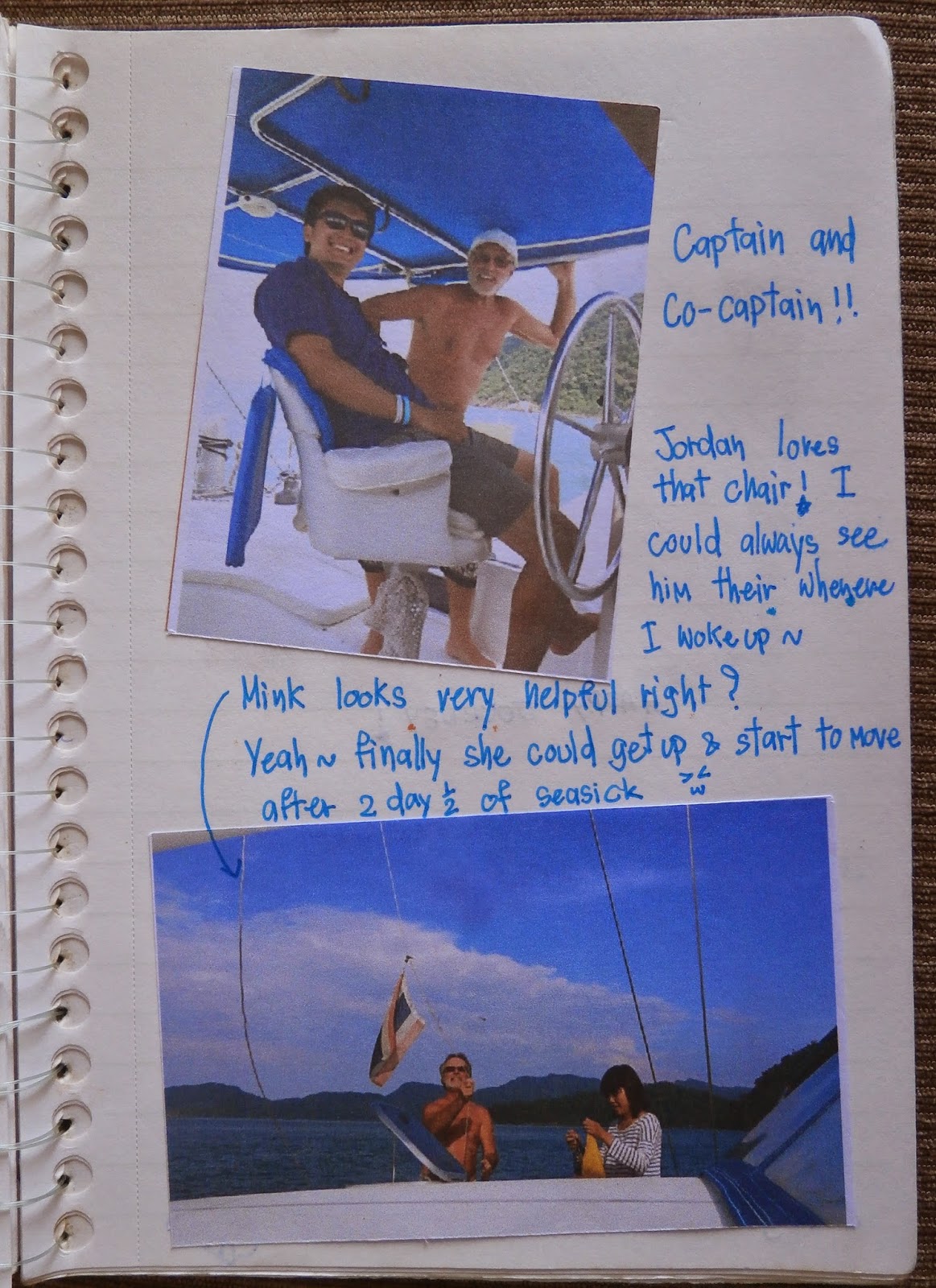 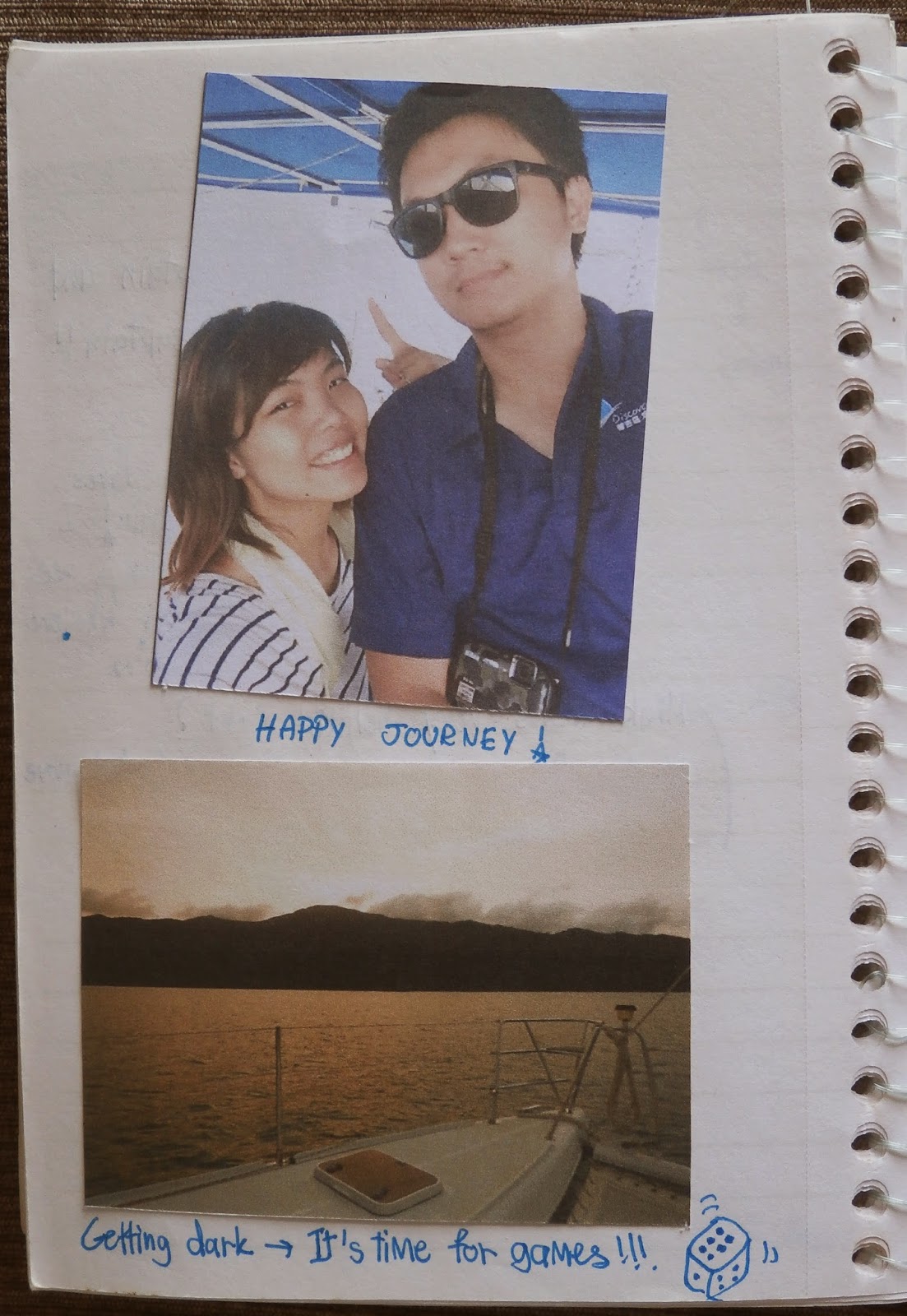 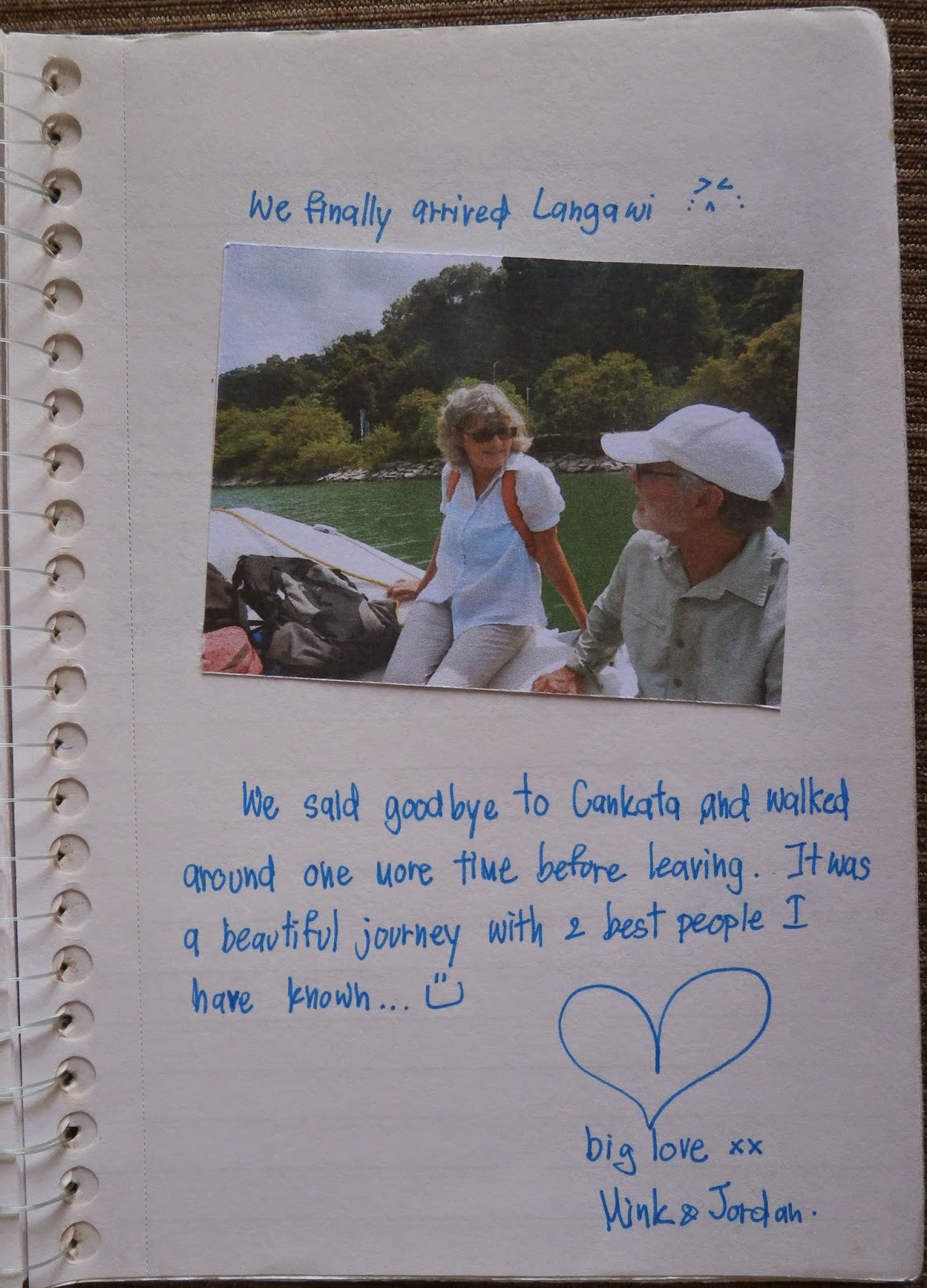 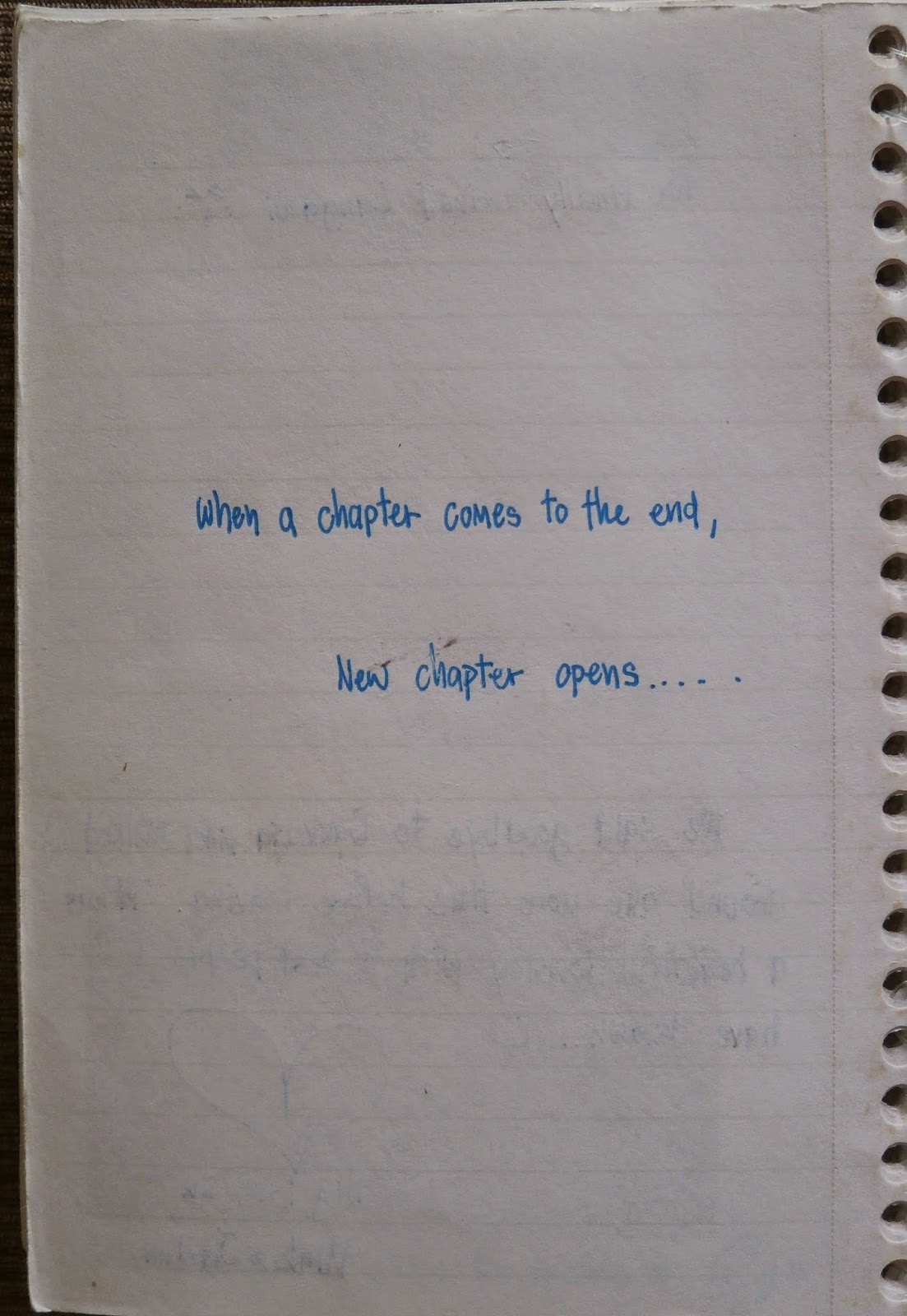 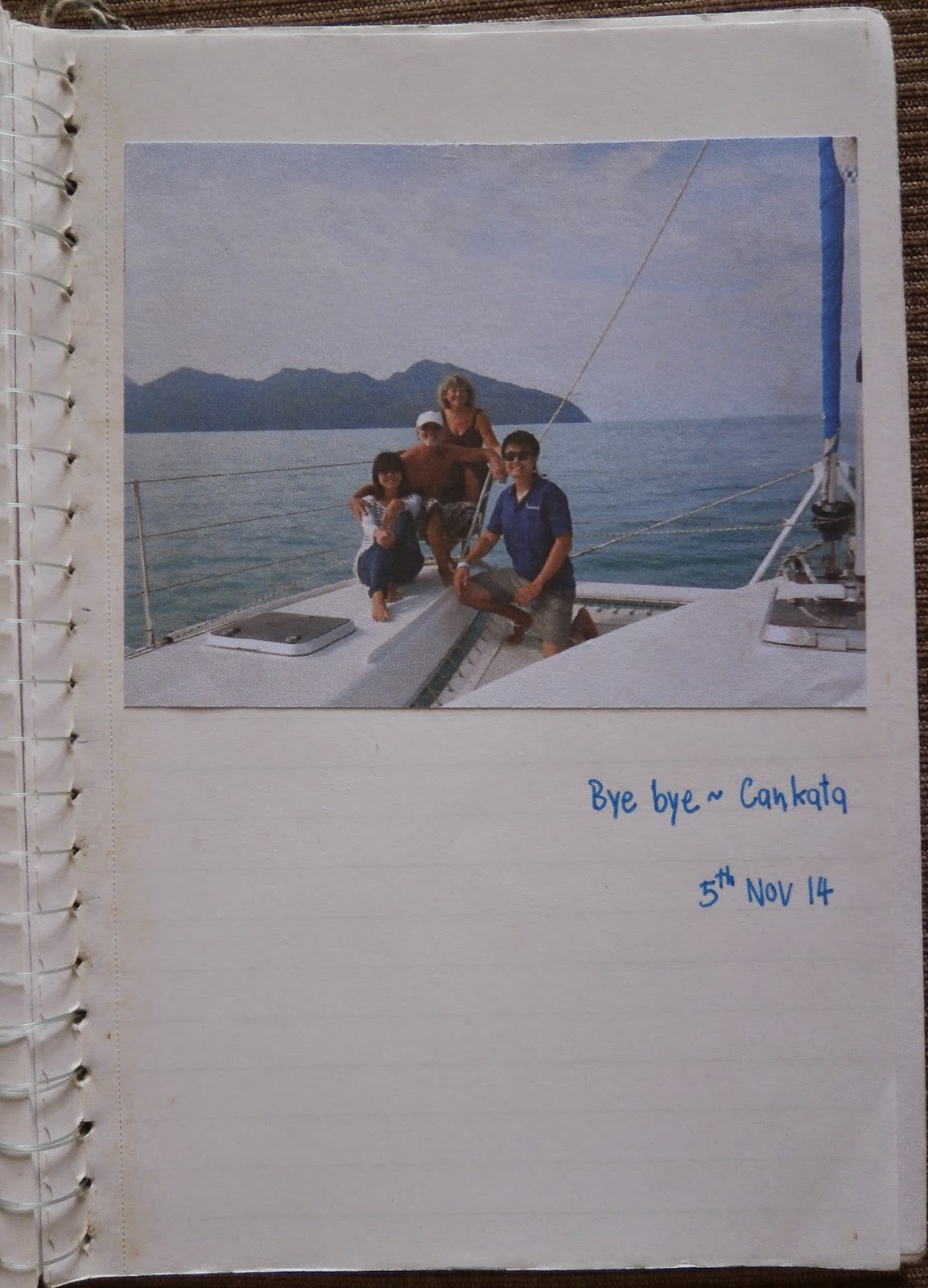 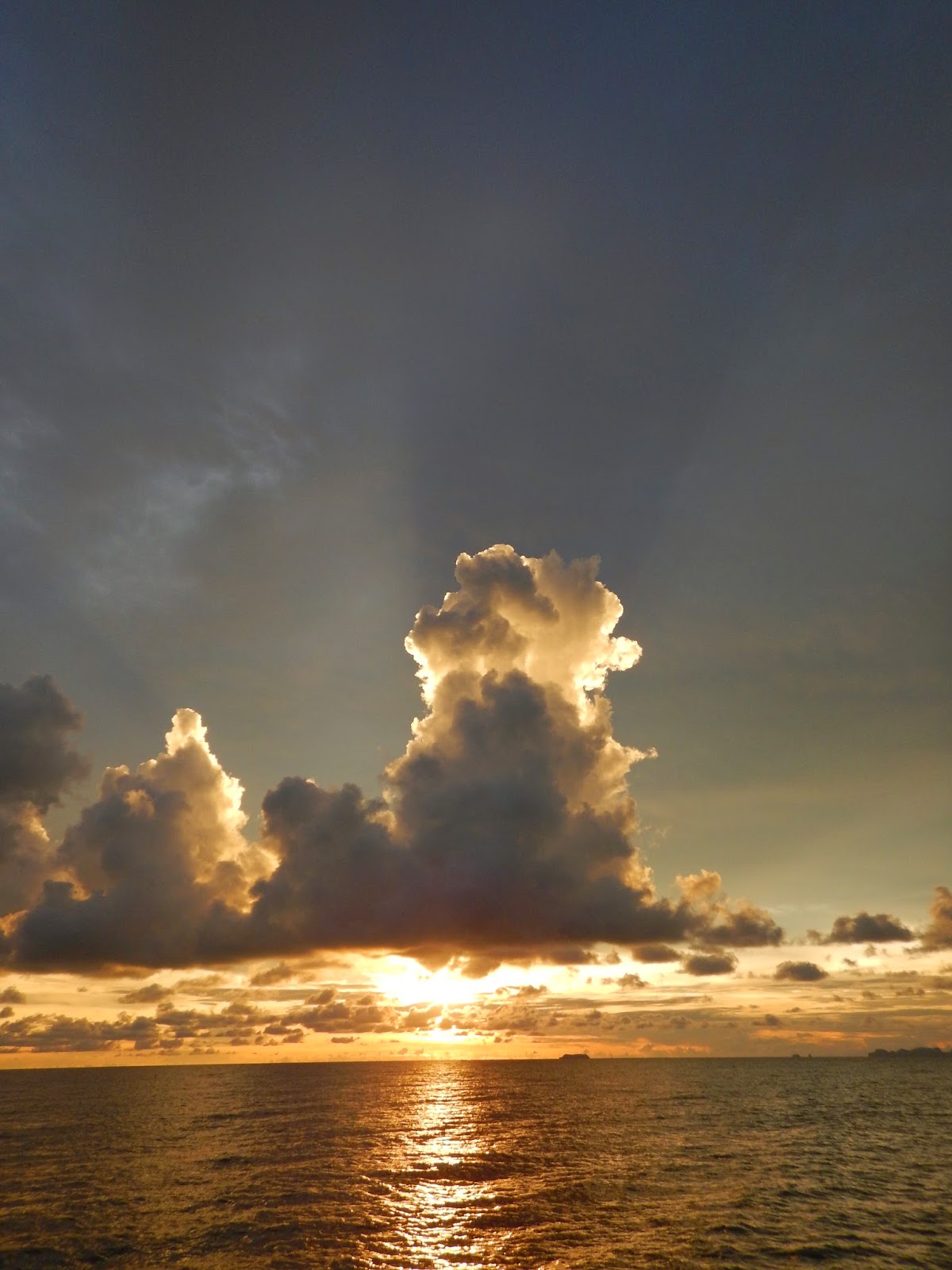 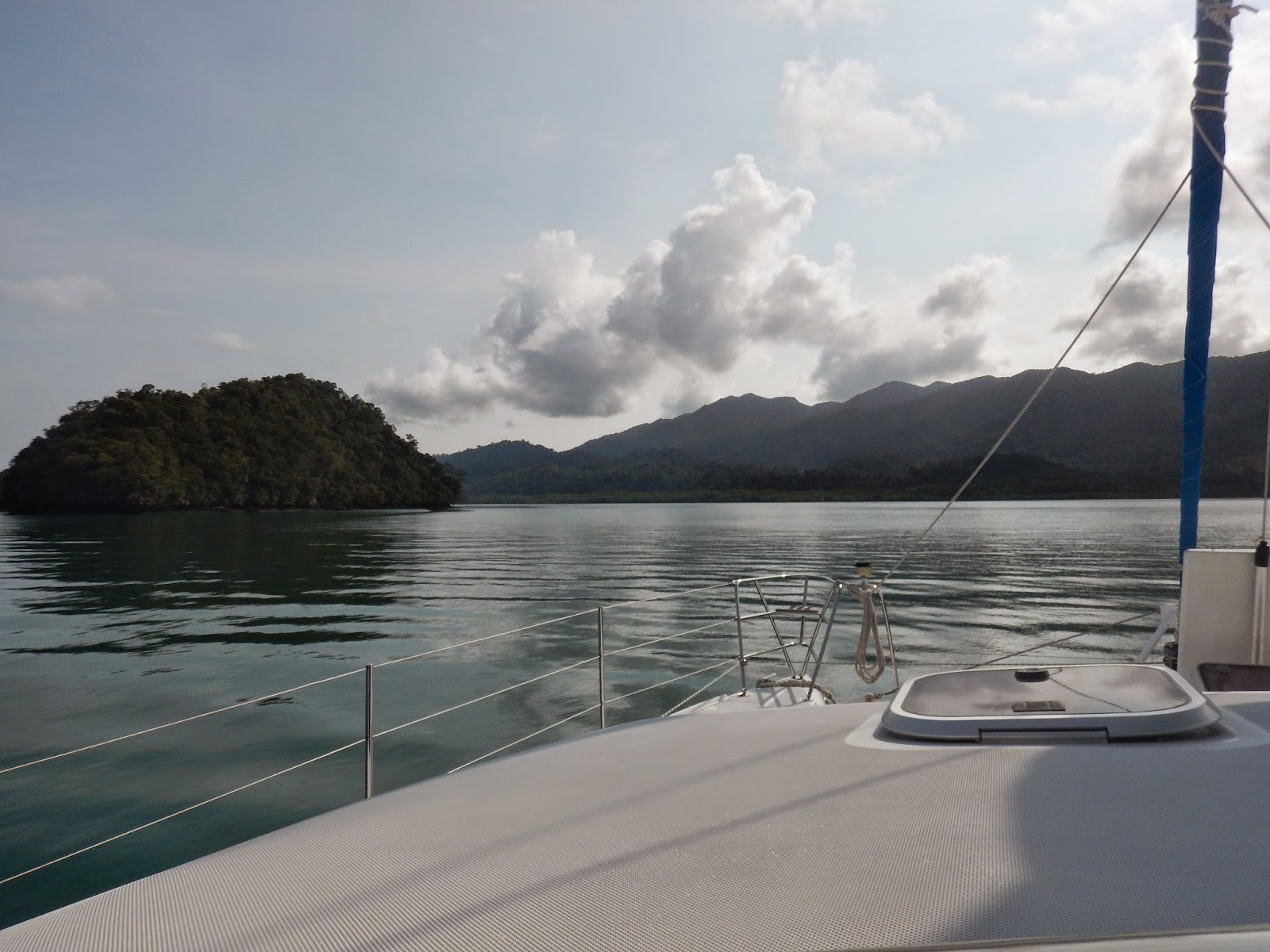 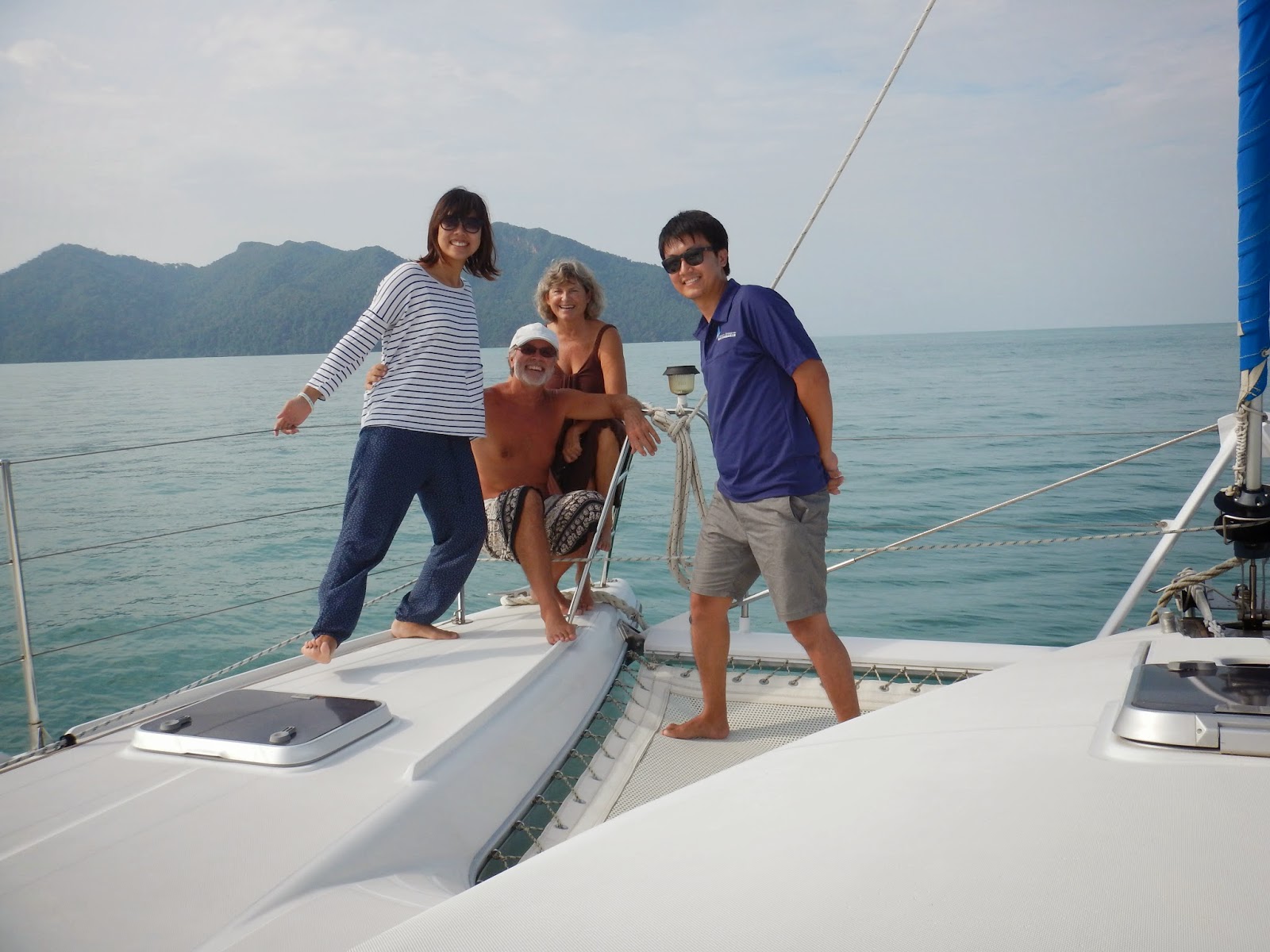 To Mink & Jordan:
Thanks so much for joining us on our last passage
and helping to make it a very special journey.
L&D xx

Our Last Journey on CanKata

On November 1, 2014, CanKata left Ao Po Marina after spending seven months on the hard. She’s always so much more alive when she is in the water.

Darrel had spent most days tending to CanKata while she was on the hard, and she benefitted from his attention. All systems were operating smoothly, and she gleamed just like a new boat.


We invited a couple of friends to join us on our last journey (a young Thai woman and her Chinese husband … passports from three different countries for immigration), and I think having visitors on board was very healthy for us – helping us to stay occupied and keeping us from getting too sentimental.

This wasn’t a sad journey for us. While CanKata was on the hard, we had plenty of time to prepare ourselves for the inevitable delivery to her new owner.  We have looked back over the thousands of photos, reread our logs and guest books, retold our more interesting stories, and agreed (time and time again) that we are making the right transition. Ten years of living on a catamaran and sailing more than half-way around the world was an incredible adventure, but ten years was enough for both of us.

We arrived at Rebak Marina (Langkawi, Malaysia) on November 5, 2014. As we approached the canal into the very-well-protected marina, I saw a senior-aged gentleman walking towards the break-wall. When he saw CanKata, he broke into a run. It was a very hot day, so I wondered why he would be running. Then he started shouting, “CanKata! CanKata!”

Darrel figured out who it was right away. “It’s Alfred!”  Alfred is CanKata’s new owner. He was there to greet us (well, CanKata) as we pulled into the marina. It was a very touching moment for me.

Moments later, when we were snuggly tied to the dock, Alfred arrived, panting a little bit, but obviously very happy to see his new boat safe and sound and in excellent condition. We invited him aboard and gave him some water, and then Darrel gave him a tour. Just a couple of days later, all the business transactions were completed and CanKata was no longer ours.

Another touching moment was when we dropped off our two visitors at Telaga Harbour. “You were our last visitors,” I said, and then tears welled up in my eyes. I composed myself, and then I asked them to sign the last entry in our guest book. We were so happy that we could share our last journey with our sweet young friends.

So now we are landlubbers again. No regrets, a gazillion memories, stories to tell and retell, and so many friends that we made along the way. Fair winds to our friends who are still out there. Cheers to all of you!

In November, we hand over CanKata to a new owner. Darrel has written a summary of our adventures with her, and Loretta selected some photos to highlight how much beauty the adventures added to our lives.

We purchased CanKata in in February, 2002.

We sailed CanKata up the East coast of with one short leg up the international waterway. We entered the Hudson River at and transited the and canals into . We kept CanKata is this area to fit her up for long distance cruising and to get accustomed to sailing her. 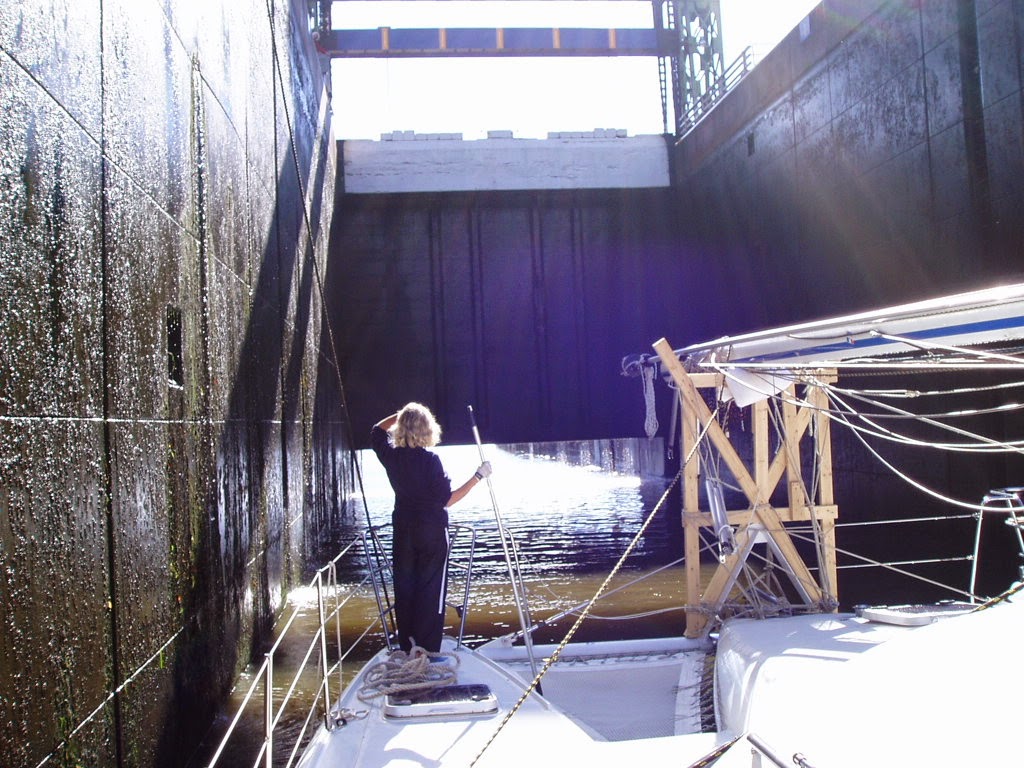 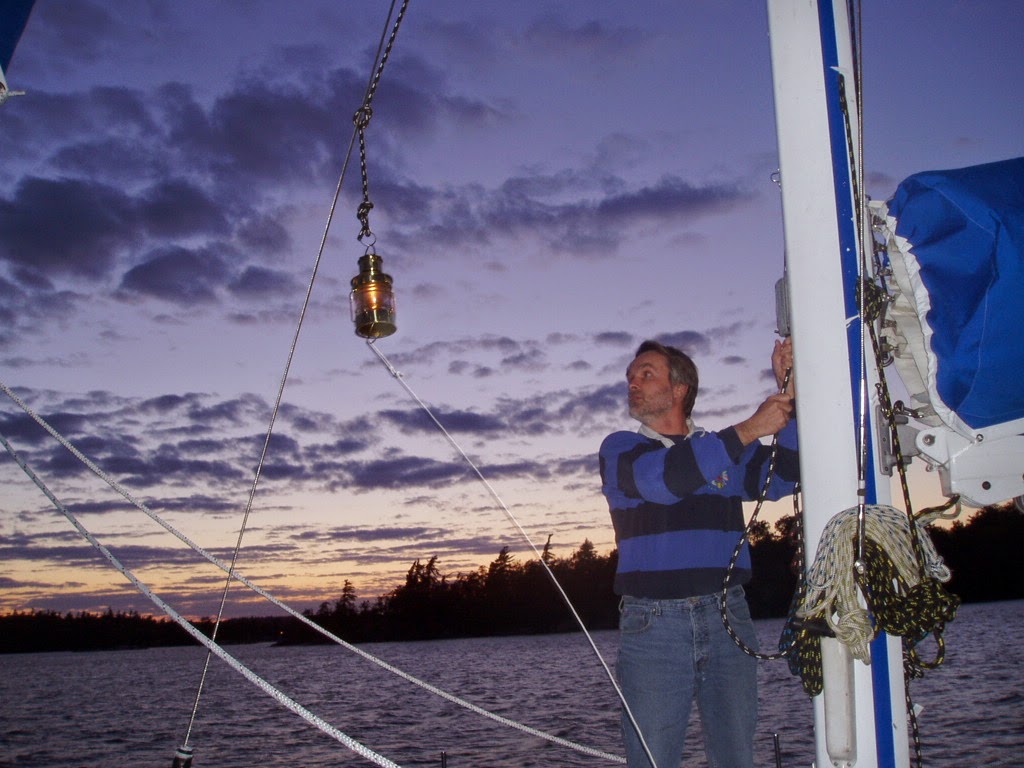 In September, 2004 we left and returned south through the and canals, down the Hudson River to and then sailed offshore to . From there we went up the Delaware Bay and through the canal into . After cruising down Chesapeake Bay we joined the West Marine 1500 Rally in , from which we left on our first long offshore voyage down to the British Virgin Islands in the . We cruised the BVI’s and the US Virgin Islands for a month and then moved south to . 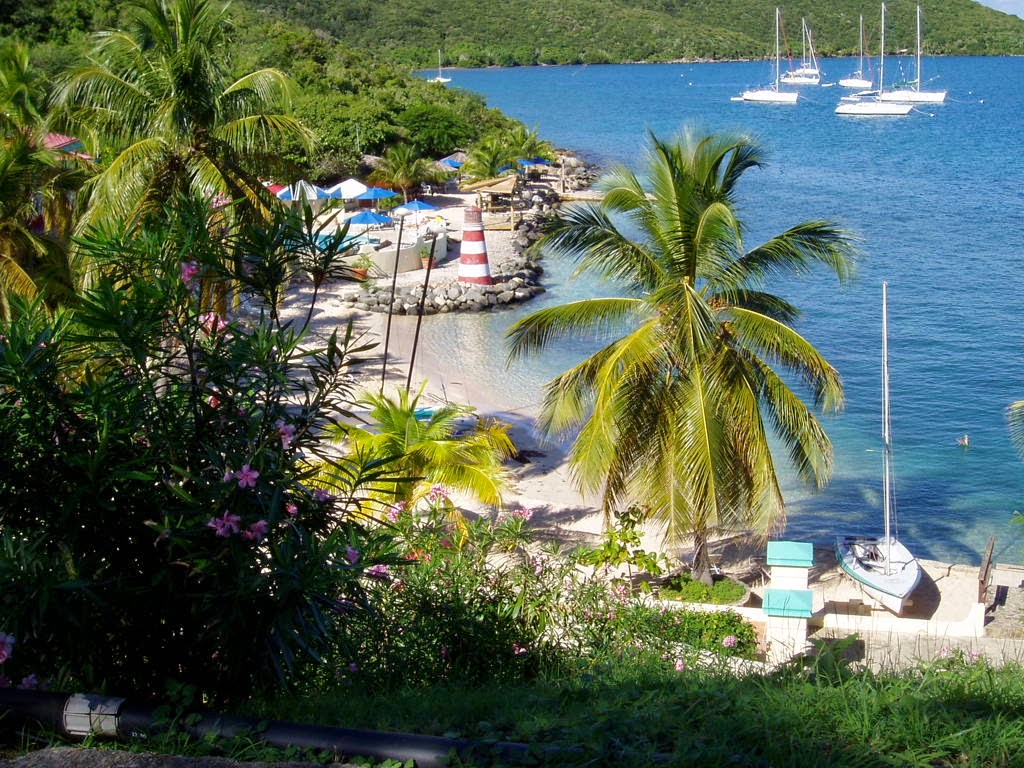 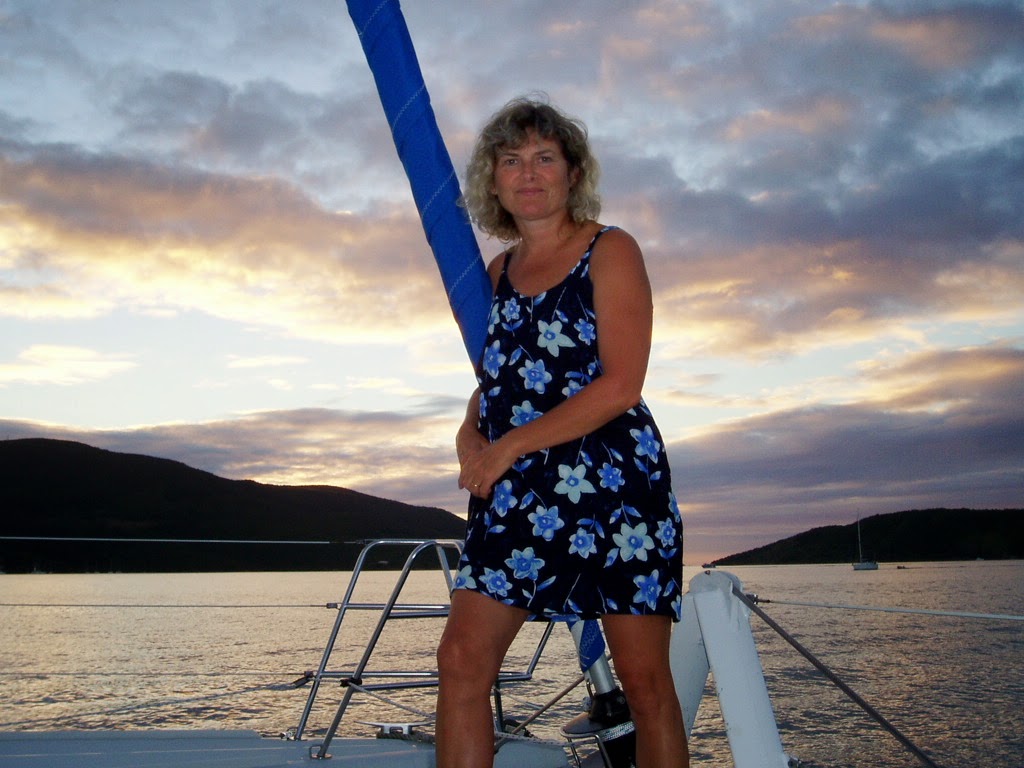 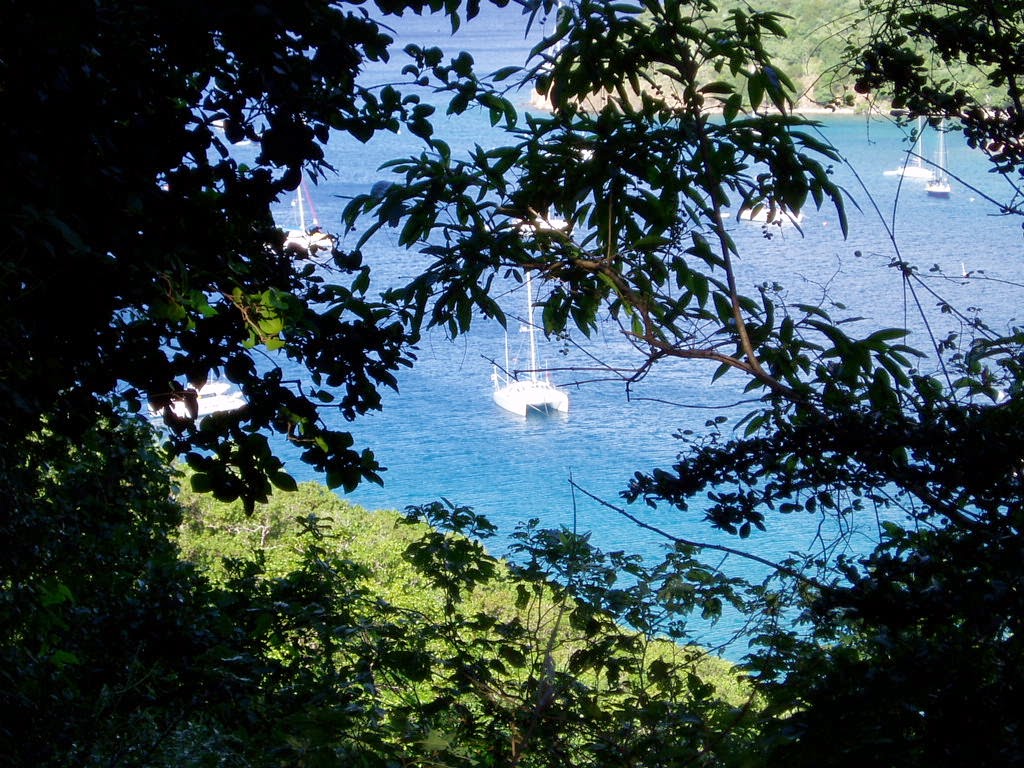 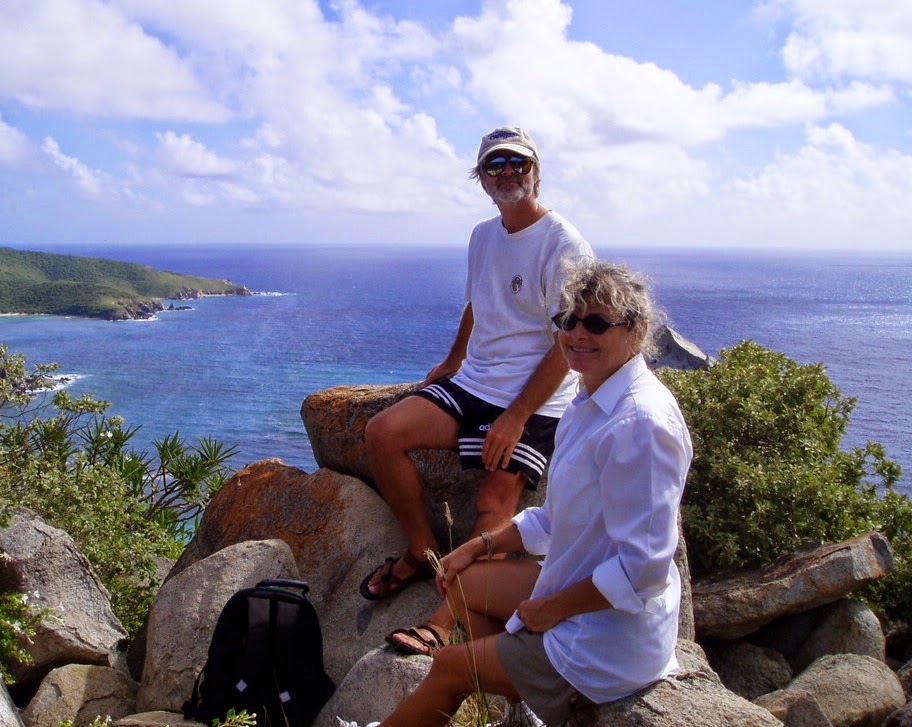 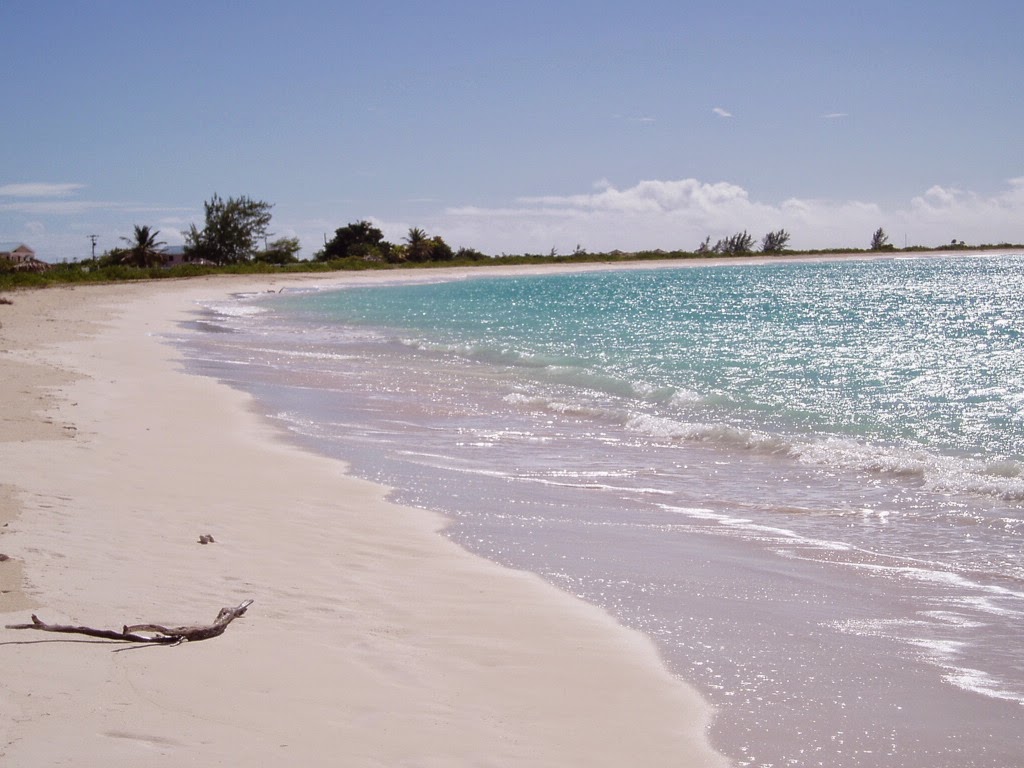 We spent the non-hurricane season in the and returned to for the hurricane season where we did final preparations on CanKata to commence our circumnavigation. In October we headed west towards with stops in Los Testigos, Blanquilla, Los Roques, Las Aves, Bonair, Curacao, and the San Blas Islands. We transited the Panama Canal leaving to our stern the Atlantic Ocean and entering the at the end of December.

Photos of the islands north of Venezuela and the ABC islands: 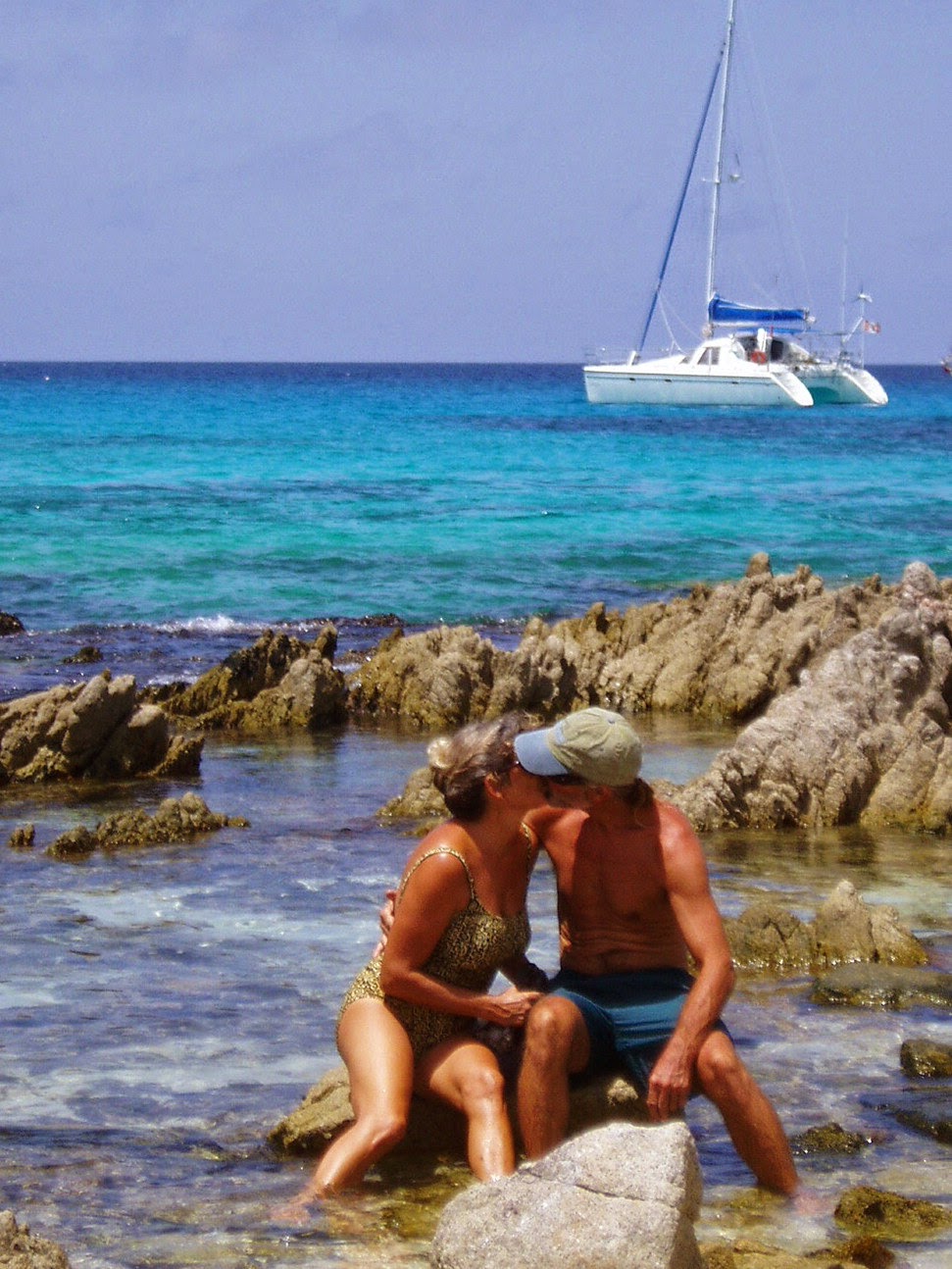 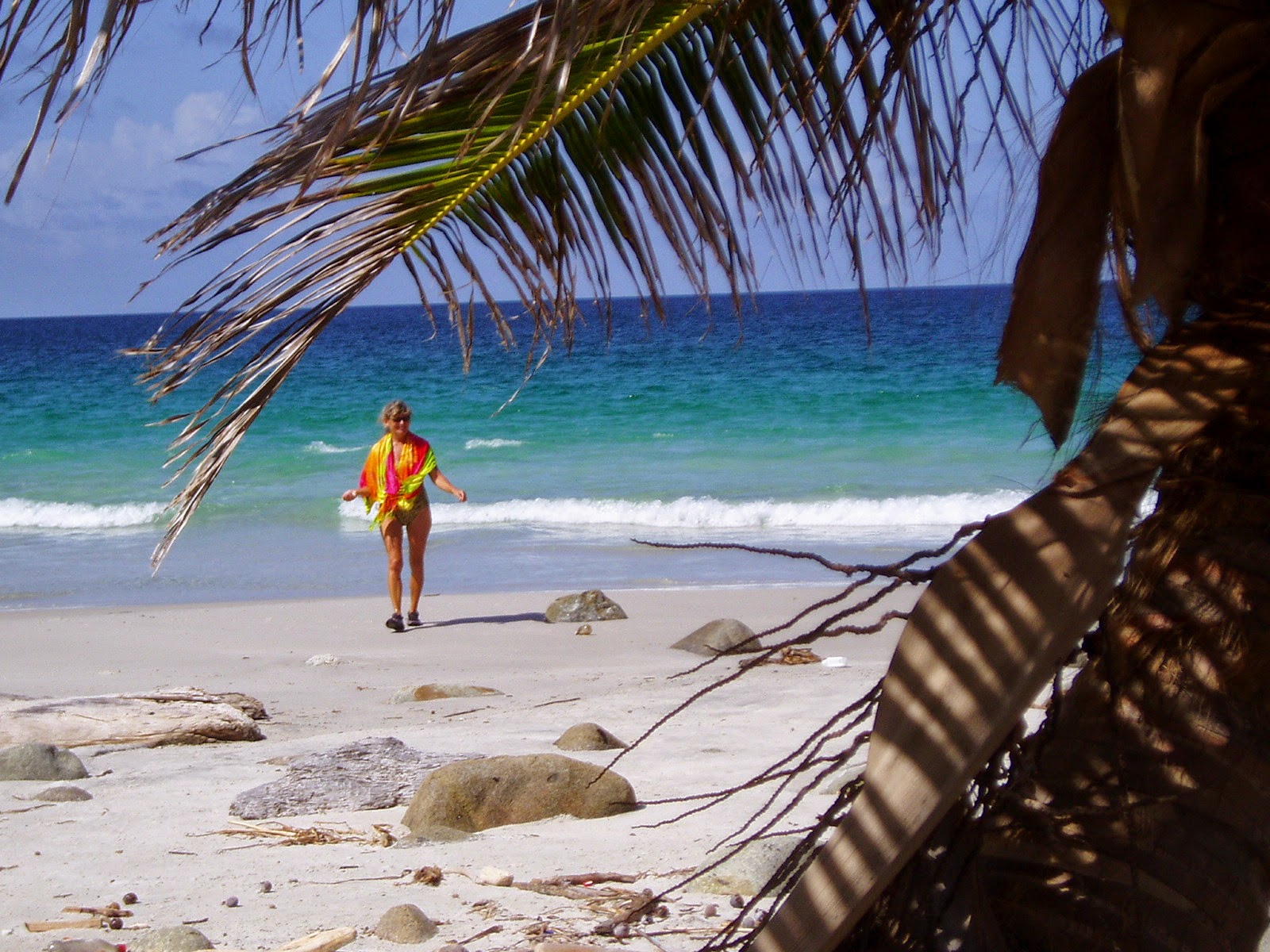 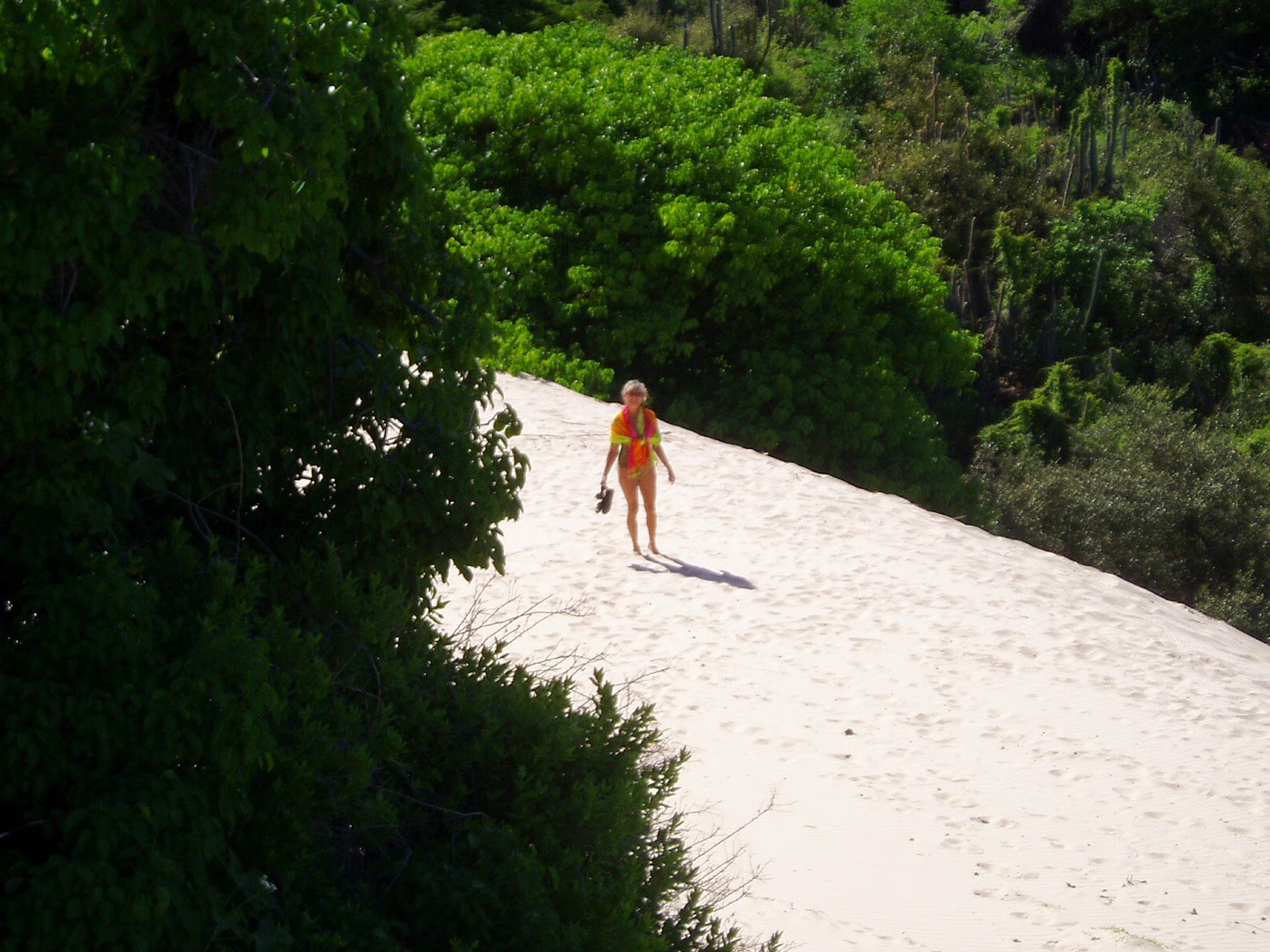 
CONTINUED IN NEXT BLOG ENTRY ...

Links to our other blogs